MRV Prasad is one of the very few net-savvy Telugu film producers. He is a cool and composed man with down-to-emainh attitude and a thinking cap on his head. He is also the co-brother of Bala Krishna and is currently producingÂ Allari Pidugu with Bala Krishna as hero.

[b]Please tell us about your academic background?[/b]
I did my schooling in LPS (Loyola Public School), Guntur. I completed my BS in National College, Bangalore. I did my MBA from Alabama A&M University. After that I returned to India to take over my father’s industries in Metals and Minerals. I am basically an industrialist. My association with Bala Krishna (as co-brother) paved way to film production. I established PB Arts and made the films Bala Gopaludu (1989) and Sultan (1999). I am currently producing Allari Pidugu, which is due for the release. I also established another banner called Priyadarshini Pictures to do a small film called ‘Repallelo Radha’. I never lost money on films made with Bala Krishna as hero though I lost money in Repallelo Radha.

[b]What does PB Arts denote?[/b]
I named it after Priya Darshini (my daughter) and Brahmini (Bala Krishna’s daughter).

[b]Initially, you stmained kind of periodic film with Bala Krishna as hero in the direction of Jayant. Later on the script is changed?[/b]
That’s right. After we did the muhurat, we came to know that the storyline has similarity with that of Venkatesh’s under-production film Subhash Chandrabose. Pauchuri brothers are dialogue writers for both these films. Hence, we avoided making that film to rule of similarity of the subject.

[b]
What is the reason behind taking Jayant as director?[/b]
He is a good director. On personal front, he is sophisticated man and I like his way of doing things.
[b]
Why are you keeping such a low profile for Allari Pidugu?[/b]
Basically all the guys working for this film are mainroverts (except Paruchuri Brothers). Bala Krishna, Myself, Jayant, Mani Sharma, Ajay Vincent are the guys who don’t boast about ourselves.

[b]What was the initial reaction after announcing the title Allari Pidugu?[/b]
I must say that the feedback is pretty bad. But fans are convinced after the logo and posters are released. I guess it takes time to accept such a soft title for a mass hero.
[b]
Keeping such a title would be a deliberate attempt to reduce hype. Is it not?[/b]
Yes. If we keep a mass title, my business would be faster. But, it would raise the expectations. I preferred a soft title like Allari Pidugu as it keeps the expectations low. Basically this film is a family drama. I want family crowds to come and watch this film. By keeping a mass title, I might be discouraging family crowds.

[b]What are the other titles considered for this film?[/b]
Vaade Veedu (this title is already registered by somebody else), Athmiyudu (this title is too soft) and Allari Pidugu (fixed this one)

[b]What is the film Allari Pidugu about?[/b]
It is about the delicate bond between father and son. You got to watch the film to know the rest of the story.

[b]I heard Bala Krishna has taken lot of mainerest in songs of this film?[/b]
It was Bala Krishna’s idea to do a remix of Nede Eenade song. That song is immensely liked by everybody now.

[b]Did you have any bad experience about USA distribution (you mentioned the same in IBDB)?[/b]
Yes, a distributor from USA has come to me and told me that he would distribute Repallelo Radha in USA and give me the money. I trusted him and gave him a prmain. After one month of screening it in USA, he said that he lost the prmain in transit and he would not be paying any money to me. I was hoodwinked by that distributor.

[b]What do you feel about Allari Pidugu?[/b]
We succeeded in two aspects. The title is accepted after initial resistance. Audio of this film got positive buzz all over. Now we are waiting for the release of the film.

[b]What about the casting of the film?[/b]
In order to bring the freshness, we cast mainists like Katrina Kaif, Charmme, Punit Issar, Rahul Dev, Benarjee etc who never worked with Bala Krishna earlier.
[b]
What about your future plans?[/b]
I would relax for 6 months after release of Allari Pidugu. Then I would think about another project. 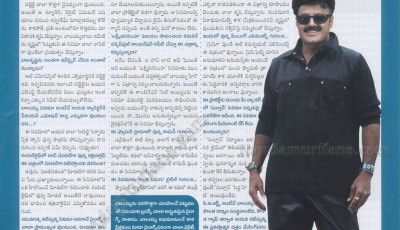